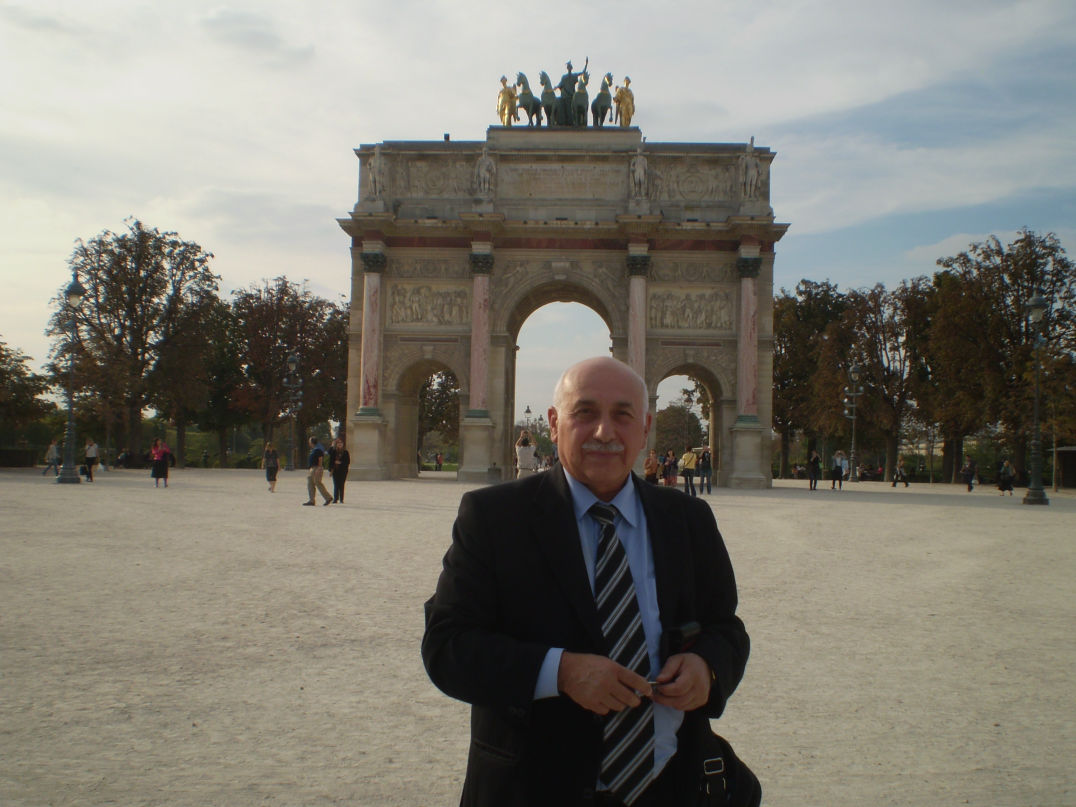 Vakhtang Licheli was born on April 16, 1948, Borjomi, Georgia. He graduated from the Faculty of History, Tbilisi State University in 1971. Since 1970, he has been involved in the fieldwork of the Vani archaeological expedition directed by Academician Professor O. Lordkipanidze, a renowned Georgian archaeologist. It was the works performed under the supervision of Professor Lordkipanidze that had a significant impact on Professor Licheli’s future endeavors. The same expedition offered V. Licheli the opportunity to perform fieldwork independently for the first time: he was entrusted with the task of pursuing the archeological research in the lower town of Vani, on the valley of Saqanchia where he has carried out research over many years. He has discovered and studied a major site of settlement, residential and cultic structures, work areas, numerous local and imported ceramic objects, terracotta figurines, etc. The materials unearthed by V. Licheli provided the basis for his qualifying paper which he successfully defended in 1981 leading to the award of the Candidate of Historical Sciences degree.

Academic experience obtained during his work at the Archaeological Research Center of the Georgian Academy of Sciences as well as in the course of the Vani expedition, combined with knowledge gained at the libraries of Moscow and Leningrad (the Hermitage and the Leningrad Branch of the Institute of Archaeology) laid the foundation for the research monograph dealing with one of the key issues of the history and archaeology of ancient Georgia, namely, the spread of Hellenism in Georgia. For this monograph, V. Licheli was awarded Doctor of Historical Sciences Degree in 1991.

While working on his monograph, V. Licheli examined archaeological materials of Colchis and Iberia dating from the fourth century BCE to the second century CE. He specifically focused on local ceramics with apparent signs on them that had been previously referred to as “unidentifiable signs”, and made a remarkable conclusion that the signs scratched on the local ceramics produced in Antiquity represented the Proto-Georgian script. Thus, V. Licheli was the first to provide the well-substantiated evidence to support a probably early use of the local script in Georgia even in the period of Antiquity (long before the emergence of Asomtavruli); the script had been used by the population of ancient Georgia for about eight hundred year. V. Licheli’s conclusion has been widely recognized by foreign professionals (including H. Feinrich (Germany). Opinions differ, however, as to whether the very writing system is syllabic or alphabetic).

Then Professor Licheli’s academic interests went far beyond Ancient history and archaeology of Colchis. From the very beginning, he showed greater awareness of demands of the domain of contemporary archaeology and the importance of integration of the exact sciences into the archeological domain and was the first (1977) among fellow professionals in the country who applied computer technology (electronic computing machines of the time) in order to overcome challenges of archaeological classification.

This experiment was accomplished with great success, at that point leading to other research in the theory of archaeology. Namely, in 1987 he examined one of the most important issues of the layer theory, i.e. mathematical criterion for quantitative assessment of the spread of artifacts within cultural layers (“saturation of layer”) which was the first step towards new archaeology in Georgia. Currently, Professor V. Licheli, in collaboration with the TSU Physicists, is examining contemporary methods of dating (electron paramagnetic resonance and dehydration of ceramics).

The archaeological expedition to Kutaisi launched in 1983 splitting into three teams that undertook extensive archaeological digs for the study of antiquities from Bagrati Cathedral, Gabashvili Hill and “Country of Kutaisi”.

The team that was supposed to explore the “Country of Kutaisi” was led by Vakhtang Licheli. Based on the exploration carried out in the surrounding area of the city, the team has discovered three previously unknown archaeological monuments such as the Tsikhia cult complex (2nd-1st cc. BCE), sites of settlement on Sarbevi Hill (6th-4th cc. BCE) and in Geguti (4th-2nd cc. BCE).

The study of such a unique region as Southern Georgia holds a special place among V. Licheli’s research interests. Prior to 1980s, sites of settlement from the period of Antiquity were entirely unknown to the territory of Samtskhe-Javakheti. The examination of written sources, allowed V. Licheli to identify site of Atskuri settlement with its graveyard that has been identified as the only area in the region so far dating back to the period of Antiquity. By comparing archaeological discoveries with written sources, V. Licheli has determined that the excerpt from “The Georgian Chronicles”, depicting the deeds of Andrew the Apostle in Samtskhe, truly corresponds with the archaeological components. In addition, the grave complex examined by V. Licheli led to the conclusion that the inhabitants that arrived in this area as early as the beginning of the sixteenth century BCE had a very specific microculture. This point of view has been supported by the material culture discovered in two graves of the late Mid-Bronze Age. It should also be noted that Atskuri site of settlement was one of the first archaeological monuments where as early as 1994 the joint Georgian and foreign archaeological expedition was launched, marking the beginning of the implementation of international programs. McGill University (Montreal, Canada) was Professor Licheli’s first international academic partner. From the same period, V. Licheli has pursued extensive academic relations with various European and American Universities and institutes. He was awarded the scholarship of the German Archeological Institute at Athens three times (1992, 1994, 1999), and the German Academic Exchange Service (DAAD) Scholarship – three times (2013, 2014, 2016). He was twice the recipient of the University of Montreal Scholarship (1994, 1995), three times the recipient of the Scholarship of the British Academy Black Sea Initiative (2003, 2004, 2005); and Coucil of Europe Scholarship (Strasbourg, 2000); USAID grant (2006); the Louvre Museum (France) grant (2009); Shota Rustaveli National Science Foundation Scholarship (2010). Professor Licheli’s international contacts have expanded during his participation in joint research projects. In different periods, he served as a leading archaeologist in Georgian-Auistrian (University of Innsbruck), Georgian-Scottish (University of Edinburgh), Georgian-Italian (Venice), Georgian-German (Jena and Nuremberg), and Georgian-French (Bordeaux) archeological projects.

Serving as a leading archaeologist in international archeological projects still continues in Cyprus where V. Licheli has been a chief archaeologist in the Cyprus Georgian Archaeological Mission from 2015 up to the present day. There the remains of previously unknown two Georgian churches have been identified (St. George Churches of Alaminos and Softades) where subsequent research is being carried out. Recently, together with his Japanese partners (Kobe University), V. Licheli started the previously unknown localization project of the Greek Colony of Phasis that applies cutting-edge techonology (LIDAR and RADAR).

From the perspective of international contacts, Professor Licheli as a lecturer pays special attention to his lecture series on ancient History and Archaeology of Georgia delivered in foreign universities. He has served as an invited professor for three European universities: Leiden University (The Netherlands, 2013), University of Innsbruck (Austria, 2011 and 2015) and Ca’Foscari University of Venice (Italy, 2017). He also delivered the similar lecture in Japan (Kobe, 2018).

Professor Licheli’s academic connections are well reflected in the membership of international organizations:
he has been the National Committee member of UNESCO’s “Man and the Biosphere” Programme (MAB) (since 2010), the member of ISMEO (L’Instituto italiano per il Medio ed Estremo Oriente) (since 2017); and the member of the Society for American Archaeology (SAA) (since 2018).

V. Licheli has served and continues to serve as a member of different organizations and committees such as Georgia’s Inter-Agency License Commission, National Register for Movable Heritage Properties, the Independent Association of Georgian Journalists (since 1991), the History and Source Studies Dissertation Council of Tbilisi State University (2000 – 2004), and the Archaeology and Numismatics Dissertation Council affiliated to the Archaeological Research Center of the Georgian Academy of Sciences (member and deputy chairman, 1996 – 2003).

The editorial work represents a separate domain of Professor Licheli’s academic activities:
- Editorial Board member of Studies, the Journal of the Archaeological Research Center, (1997-2003; Journal Pipeline Archaeology, Editor (2 volumes); Editor of the Journal Interdisciplinary Archaeology (2 volumes); Editorial Board member of Caucasus Journal of Social Sciences (2007 - current);
serving on Board of Advisers for Ancient Civilization from Scythia and Siberia (The Netherlands) (2003 - current); serving on Board of Advisers for PRO GEORGIA JOURNAL OF KARTVELOLOGICAL STUDIES (Poland) (since 2017).

For the purposes of popularization of archaeology, the TV talk show, authored and presented by V. Licheli, was especially remarkable among the 1980s projects. This talk show was part of the first series of specific programs dedicated to archaeological research and achievements. As an author of several documentaries as well as playscript co-author, Professor Licheli further engaged in dramaturgy (the play was performed by Batumi Ilia Chavchavadze State Drama Theatre and the Georgian National Opera Theatre). Professor Licheli’s public work deserves special mention. During Glasnost of the Soviet era in 1980s, V. Licheli was among the first few in Georgia who published a lengthy letter against a major Sovier project (“The Transcaucasus Reailway”). The letter sparked harsh response on the part of the progressive part of the Georgian society.The protests ultimaty undermined the proposed project, thus preserving the unique nature of the Aragvi Gorge and, most significantly, preventing the authorities from the construction of another tunnel through the Caucasus mountain chain, ultimately, contributing to preservation of the authentic natural environment.

Professor Licheli regards teaching and development of young archaeologists as the issue of tremendous importance. Since his election (2010) as the Head of the Department as well as the Director of Institute of Archaeology at the Faculty of Humanities (Ivane Javakhishvili Tbilisi State University), he entirely modified educational program in Archaeology completely adjusting it to contemporary global standards. Specifically, he introduced such compulsory courses in Archaeology that have not previously been taught, namely: technology of metals, mathematical and statistical methods, environmental archaeology, geology-geomorphology, mineralogy, management of projects in Archaeology and so on.

Supplemental textbooks (i.e. Methodology of Field Research in Archeology and Issues in Archaeology Management) published by V. Licheli provides extensive assistance to students. Despite such wide array of interests, Professor Licheli’s main focus is on his academic activities which equally encompass both field research in archaeology and theoretical research. For years, he has participated or supervised in archaeological excavations in the territory of Georgia in places such as Vani, Nastakisi, Dzalisa, Abastumnani, Tsnisi, Benara, Aspindza, Tsaghveri, Mzetamze, Igoeti, Tmogvi, Urbnisi, Otarsheni, Bertakana, Poti, Chibati, Ureki, Vale, Atskuri, Paravani Lake and so on.

In recent years, V. Licheli supervised archaeological excavations on Grakliani Hill where he discovered the oldest inscriptions (10th c. BCE) ever found in Georgia and Caucasus. His discovery, leading to an extensive international response, sheds new light on the issue of origin and spread of ancient writing systems. Professor Licheli’s conference presentations of recent years delivered in Jena and Nuremberg (Germany), St. Petersburg and Moscow (Russia), and Brussels (Belgium) were dedicated to the analysis of these writing systems.

He is a veteran rugby player.